skip to main | skip to sidebar

We've been very busy lately! So far, most of our efforts have been hidden from public view, but over the next weeks and months, more and more things will pop to the surface.

We have updated our HTML website with photographs from the installations, and with some links to articles and blog posts about the show.

Coming soon: a short video about the project, featuring footage from the installations and interviews with visitors.

We're on day two of a two-day installation, and there are already more than a dozen articles and blog entries about the show. Click on the title to see a thoughtful review of the show with a few photographs taken in the installation.

As expected, last night was quite remarkable. We've gotten used to being an island of calm surrounded by chaos, but the mood in the installation seems to become even more powerful around sunset. As I mentioned in an earlier post, the area around us was quite charged at dusk. Police on horseback, police in SWAT gear, police wearing face shields and gas masks confronted protestors also dressed largely in black, many of them wearing goggles or with handkerchiefs tied around their faces to help them contend with pepper spray. The showdown between the groups had turned into a standoff right at sunset.

At just that moment, we played the Adhan (or "call to prayer") over our loudspeakers. It's sensitive territory, incorporating elements from Islam into our art piece. We don't want to send the wrong message to any devout practitioner of any faith. But we thought it was worth the risk: to remind us all that Christians, Muslims, and Jews worship the same god; to invoke the idea of sincere devotion to a higher power; and, frankly, to inject beautiful sounds into a chaotic and unpleasant environment.

Not long after the muzzein informed us for the last time that there is no god but God, we began to see a trickle of visitors coming from the direction of the police/protestor standoff, some of them with tears in their eyes. As one man approached the exhibit crying, he thanked us for the reminder that we are all God's children. (His words, not mine.)

The moment reminded me of one of Rumi's poems:

I tried to find Him on the Christian cross, but He was not there; I went to the Temple of the Hindus and to the old pagoda, but I could not find a trace of Him anywhere.

I searched the mountains and the valleys but neither in the heights nor in the depths was I able to find Him. I went to the Kaaba in Mecca, but He was not there either.

I questioned the scholars and philosophers, but He was beyond their understanding.

I then looked into my heart and it was there where He dwelled that I saw him; He was nowhere else to be found.
Posted by Tom Loughlin at 11:57 PM 2 comments:

Sunset is just around the corner. I'm really looking forward to seeing how our visitors respond as the daylight fades, and the lights in the installation start to really take effect.

I've lost count of the number of people I've talked to from all walks of life. Hundreds. Interestingly, the overwhelming response to the show from visitors has been strongly positive. We have had a few guests who were challenged by what we are doing, but so far it's been nothing but civil discourse.

The same can't quite be said for what's going on around us. As I write these words, there is a standoff going on between Denver and Aurora police and protesters. We're not quite sure how things got inflamed, but somehow things progressed to the point that several hundred police officers in black riot gear faced off with protesters just a few hundred feet from our installation. Pepper spray was used, people were running everywhere, and now the police have about 150 people pinned down in a public plaza. Nobody's quite sure what's going to happen next.

An interesting thing happened in the middle of all of this. Because of where our installation is situated, mounted police, protestors, and all sorts of people were charging by. No matter how crazy things got, our structure was a conflict-free zone. No confrontations took place in our immediate vicinity. Some protestors who had been pepper sprayed chose to sit right outside our structure as they recuperated. It's hard to describe what it feels like when a young woman who is trying to recover from being pepper sprayed looks at you with bloodshot, watery eyes and tells you how important she thinks your art is.
Posted by Tom Loughlin at 9:19 AM 2 comments:

What a day we're having!

Around 9 am, when the structure had only been up for a little more than an hour, a man came by to tell us how upset he was by what we're doing here, and announced that he planned to come back with dynamite to destroy the exhibit. One of our staffers struck up a conversation with him. Within ten minutes, he had changed his viewpoint completely. He said he had never stopped to think about the fact that Iranians were human beings too. As he left, he said he wanted to go tell all his friends to come visit us, since he thought it would be interesting for them to see what we're doing.

Well, I guess we've made a difference for at least one person!

There is an article in this morning's Rocky Mountain News about the installation. It was posted online around 7 this morning, and already there are more than a dozen comments about the show. Click on the title of this blog entry to see the article.

It should be an interesting couple of days here in Denver!
Posted by Tom Loughlin at 11:37 PM 2 comments:

Setting up in Denver

In a few short hours, we'll begin setting the installation up in Denver's Civic Center Park. We're all very excited! If all goes according to plan, we'll have the structure up and running by 8 am. We're envisioning what it will be like for someone who lives in the area to see an enormous art installation appear out of nowhere.
Posted by Tom Loughlin at 1:30 AM 3 comments:

I am watching the Iranian team entering the stadium in Beijing during the opening ceremonies. It's heartwarming to see sculler Homa Hosseini bearing the flag, but it breaks my heart to hear boos coming from the crowd as the Iranian delegation marches.
Posted by Tom Loughlin at 9:08 PM 1 comment:

Well, the structure is back in the truck, and the field where it stood is empty again. What a response we had this weekend! Hundreds and hundreds of people walked to a field on the edge of town to see a show about Iran. The feedback we got was very encouraging! As an example, a woman I had never met came up to me this morning to tell me she had dreamed about the show last night. We all feel like we're doing something important, and that it's working the way we had hoped. Very exciting!
Posted by Tom Loughlin at 5:40 AM No comments:

We just finished putting up the installation in a field in Crested Butte, Colorado. We thought we should have a sneak preview for our hometown, and for a few unsuspecting visitors who are here for the Art Fair this weekend!
Posted by Tom Loughlin at 2:00 AM 2 comments:

We're in the midst of a hot week in Denver, installing the lights, speakers, and wiring harness in the structure. When we're finished, we'll be able to keep the wiring inside the metal tubes which make up the framework, even when we're taking the whole thing apart to transport it.
Posted by Tom Loughlin at 9:27 PM No comments:

Here I am in New York, working with our excellent printer. I am looking at proofs for all the images in the show and they are looking remarkable! The technology we are using did not exist a year ago. The prints will be just as I dreamed they would be -- translucent yet vibrant, with wonderful skin tones, and clearly visible from both sides. It's a dream come true for me, and I hope the installation we create will look like a dream to viewers.
Posted by Tom Loughlin at 8:02 AM No comments:

Bump in the road

Unfortunately, a key member of our production team has had to leave for personal reasons. We are trying to figure out what this means, but it's clear that we won't be able to accomplish everything we had planned. Right now it seems that the best course of action is to cancel our plans to attend Burning Man this year, and focus on the Democratic and Republican National Conventions. It will be a hard decision to make, but we'll just have to make an educated guess based on what we know. Most importantly, we wish Rachel well, and hope that her departure from the project makes her life easier right now.
Posted by Tom Loughlin at 7:58 PM No comments:

pictures of you: Images from Iran

From the sneak preview in Crested Butte, Colorado

A wide-angle view capturing four of the six large portraits in the central octagon. 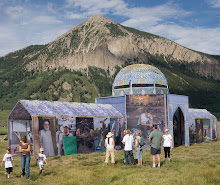 We popped the structure up for a sneak preview in Crested Butte, Colorado, and hundreds of people came!

It's a dream come true to see Iranian faces superimposed on the American landscape. This is a photograph through one of the translucent panels.

This American couple just realized that the slide the boys are playing on is designed to resemble a helicopter gunship. It's been a controversial image in the installation!

A young visitor exits from the corridor between the two octagons.

Tom Loughlin
I live in Crested Butte, Colorado, but don’t have the sense to base my work there. I have been shooting with film since my father entrusted four-year-old me with a Kodak Instamatic camera. I began shooting digital cameras three decades later. I studied English literature and filmmaking at Dartmouth College. My project, “Hurricane Katrina: After the Flood,” comprised medium-format slides documenting the devastation in New Orleans one year after the storm. The effort raised thousands of dollars for the Greater New Orleans Foundation’s rebuilding fund. My “Red Hot Ladies” calendar featured semi-nude portraits of community activists opposing a molybdenum mine. I recently received a special mention from the Banff Film Festival for my photograph, “All that dies,” captured with Hasselblad’s Xpan II panoramic rangefinder camera. My current project, “pictures of you: Images from Iran,” is a traveling outdoor multimedia installation featuring portraits of Iranian citizens printed on translucent silk. Images from the show, and my previous work, can be seen on my website: www.manjushriproject.org.